Yesterday I reviewed Susan Lewis Solomont's  memoir Lost And Found In Spain . It is a great book both for Iberophiles and foodies. She also kindly sent a recipe from her time there -  gazpacho - from the embassy chef  Gustavo. I had to try it and I have to say   this is my new summer favorite. I love the fresh taste and the seamless blend of veggies. The coolness of it is a welcome change , especially during these hot June days. 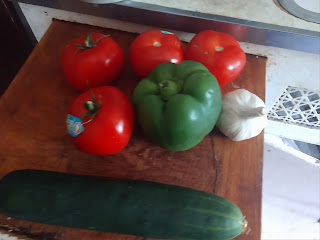 These are the veggies I used, four tomatoes, one green pepper, one cucumber and a garlic clove. Gustavo's recipe called for double the veggies and less garlic but I geared it towards servings for two to three people. I cut back on the cucumbers and the pepper. I added a small minced clove of garlic because I like a more robust garlic flavor.
It was a matter of cutting into small manageable pieces. 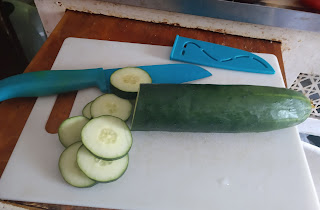 First the cucumber is thinly sliced. 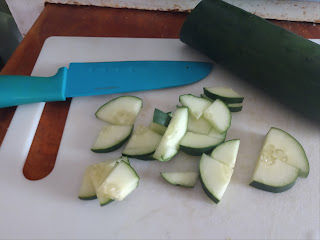 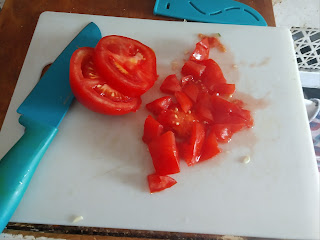 The same goes for the tomatoes. 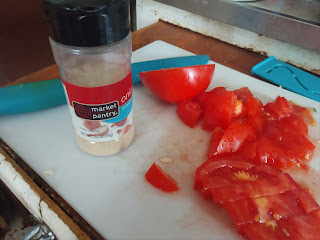 Gustavo's recipe called for a quarter of a fresh onion however my family is not big on that, probably because of its' intensity. I used about a tablespoon of onion powder instead.
This is the green pepper I used . 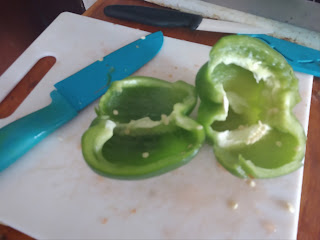 Use a large knife for cutting the peppers in half 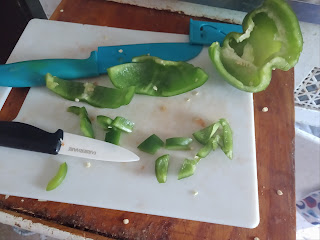 Then a smaller one for coring, deseeding and dicing. 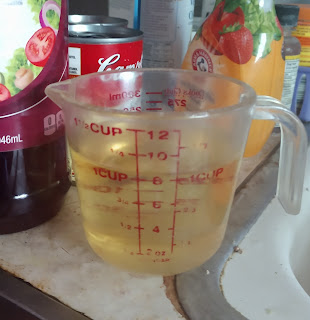 Use a cup of olive oil for body. Spanish olive oil is recommended but I
used my beloved Fillippo Berio. The recipe also calls for three spoonfuls of
vinegar. Three tablespoons of red wine vinegar did the trick. 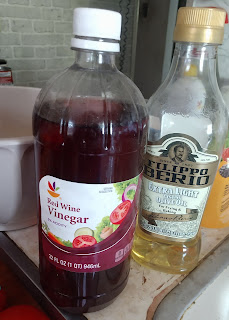 Then it was using my immersion blender to create a cool creamy miracle.I added just a couple more tablespoons of olive oil  along with a good pinch of sea salt and fresh ground pepper. Using an immersion blender can be daunting, yet I find it works better than a conventional one. It did take a while and veggie bits and juice got spritzed around  a lot. 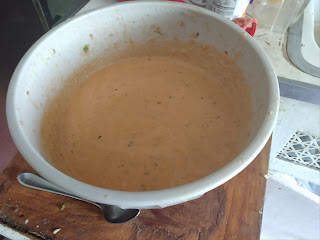 The end result was worth it. I love this soup. 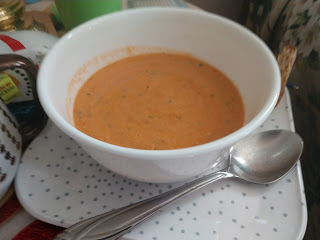 It was both incredibly smooth and airy. The fresh vegetable taste was amazing. I could taste the individual veggies yet at the same time , taste the harmonious blend. The only side was a slice of artisanal whole grain ciabatta bread with a drizzle of olive oil.I would say serve this with a chilled red Spanish wine of your choosing.

Ambassador Solomont and his wife, Susan Lewis Solomont were lucky to have such a great chef as Gustavo at the embassy. His gazpacho recipe is a classic. It is also my new favorite summer recipe.