Imagine being an ambassador's spouse in a foreign country. There's the shock of the new, culture, language and mores. For Susan Lewis Solomont, wife of the Spanish ambassador under President Obama, this was the case. Yet her love for Spain and its' food conquered those qualms. Her book ,  Lost And  Found In Spain written about her  and her husband's three and a half years there is an interesting read.There's adventure, beauty , history and , of course, food.

Her book, published by Disruption Books. is a valentine to her family''s time in Spain. It truly is a riveting read, taking this Brooklyn born girl from her and her spouse, Alan's home in Boston to the embassy in Madrid. One of the aspects that I loved is her discovery of the diverse dishes from the country's many provinces. A few times I found myself  craving jamon , the dry cured ham from hazelnut fed pigs. There is an interesting chapter about she and Ambassador Solomont dining with the great and innovative chef , Ferran Adria, the genius behind the world famous restaurant El Bulli. Ms. Lewis-Solomont  was treated to a unique feast for all the senses. Also she and her husband, along with her sister and her husband were able to get a table at a restaurant  only open for six months a year and offers one seating a night.Getting there is a whole book unto itself, because it's located in a sandy cove, dangerous to get to by any vehicle. Yet the meal was well worth it. Chef Adria is a culinary scientist , bending all the rules of physics to create amazingly singular dishes. His sloe gin fizzes came with a head of  warm foam, mimetic peanuts, a peanut shaped pastry was filled with a seductive warm peanut and chocolate filling. Another adventure included a fabulous meal in a cave(!) restaurant where Ms. Lewis-Solomont enjoy grilled lamb chops and crawfish, washed down with homemade wine.

Another famed chef, Jose Andres, the great humanitarian who brought hot food and hope to the victims of Hurricane Maria in Puerto Rico, is also  mentioned in this memoir. He takes Ms. Lewis- Solomont on a trip to the gastronomy fair , Madrid Fusion, very early on in her tenure. For her, a foodie through and through, this was sheer heaven. She was able to taste all sorts of foods from all over the world. Best of all the outing ended with an invitation to Chef Andres favorite restaurant, Gerardo's in Oviedos, the capital of Asturias, in northern Spain.  The eatery, first established in 1882, featured several fresh  fish courses with the fish being caught that day in the nearby Bay of Biscay.  Of course ambassadors also have promote the country 's businesses and encourage trade with the US. The Solomonts promoted Spanish olives - used for Italian and Greek olive oils. This was a surprise for me, considering I'm the first one to advise people to always use Italian olive oil. Spanish olive oil is even more flavorful, and it's something that I'll try, thanks to the book.The Solomonts also had their own phenomenal cooks on the embassy grounds, Gustavo and Rosita, Below is Gustavo's gazpacho recipe (which will be featured in tomorrow's post) As much as I love cooking and baking, I also love history. The accounts of the Solomonts' trips across Spain were  fascinating . I adored reading about Sevilla where Jews, Arabs and Christians worked and lived together to create a modern , cosmopolitan center of learning and tolerance during the Middle Ages.

Lost And Found In Spain is a definite must read for anyone who loves, Spain, traveling and food.It is beautifully and lovingly written, a true valentine to the country so full of flavor. Read it and experience the wonder and joy Susan Lewis Solomont had for this amazing nation 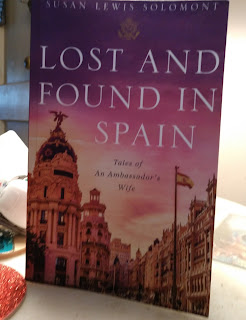 Cut everything into pieces and put it together in a blender, use high speed--it really makes a smooth mix.
Serve cold