What makes a good cookbook? One that not  only has recipes but helpful hints and advice. There's a new cookbook out with a rather off putting name. Yet, it is a must have for anyone just starting out on their own.

The book is The Anti-Cookbook: Easy Recipes For Food Smart Living, (Claws Out Press 2018) was written by two former college roommates and friends,Shelley Onderdonk and Rebecca Bloom. Despite the title , it really is a book about cooking and baking. surprisingly a coloring book, The Anti Coloring Book inspired them to create their book. They saw how this activity book encouraged their children to create pictures instead of just coloring pages.Use your imagination not the rules.It's this philosophy that Ms. Onderdonk and Ms. Bloom bring to their book.It's a template for thoughtfulness around the way people feed themselves. Anyone can use this book, even the most seasoned home chef. The pages are chock full of advice, not multi step recipes that may scare off novices. This is a great gift for college freshman and those grads embarking on a new career and home,far away from mom's kitchen.Yes , there are recipes, and a wide range of them but they're only take up three or four lines. The only involved ones are the energy bars,basic cobbler, muffin, and oatmeal chocolate chip cookies. None of them require fancy ingredients or expensive or complicated gadgets. The authors do include a list of must haves such as pasta pot, wooden spoons and oven mitts.

I really like this book. There are no traditional chapters labeled "Breakfast'" "Lunch" and "Dinner" with specific recipes assigned to them. Instead  they're titled "Real Answers, Real Questions" and "Fish And Coffee" (not what you think but  all about ethical shopping and eating). One of the best aspects of it is the spice cabinet must haves  such as basil , cinnamon  and garlic powder to name a few. There is also  a section about DIY or not DIY   and which foods are easier to make at home or buy premade at the grocery. Another plus is the diversity lists that lets you toggle between cheeses, oils, flours, salts ,grains,  and milks,. All come with the authors' opinions , but it's up for the reader to decide what works best for them.I also like how they list combined spices that make up certain cuisines such as turmeric and black pepper for Indian and ginger and garlic for Asian.Boosts are also included, from health and taste. A fun chapter is planning the week  and that includes a different cuisine for every dinner that includes Middle Eastern and South American. Yes, there is a chapter for sweet tooths with easy desserts such as strawberries and cream and a simple rice pudding. There is also a chapter on delicious foods where quiche and pecan pie share the same page. The book ends with a philosophical bent  -how cooking connects you to your family's past and present along with your places in the cosmos. What an interesting way to end.

The Anti-Cookbook is really a pro cookbook and a template for life. The recipes are easy and tasty. The advice is priceless and timeless. 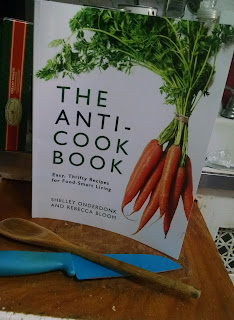